Contact
Email: winnipeg@thecic.org
Phone: +1(204) 996-3422
Location
Winnipeg, MB
Canada
About
The Winnipeg Branch was originally formed in 1928 as a Branch of the Canadian Institute of International Affairs (CIIA), from three local groups known as the Canadian League. The Winnipeg Branch, the largest of the original 1928 branches, was one of the most active branches during the 1930s. In 1935, the Winnipeg Branch began sponsoring popular radio broadcasts on international affairs. John W. Dafoe, editor of the Winnipeg Free Press, contributed greatly to the growth and success of the Branch, first as vice-president and later president of the CIIA.

In 2008, a group of individuals associated with Winnipeg’s business, media, academic and military constituencies came together to reestablish the Winnipeg Branch at a General Meeting of local CIC members. The Winnipeg Branch was the first Branch created under the auspices of the Canadian International Council (CIC), on 19 November 2008.

The Winnipeg Branch delivers an annual Speakers Program between September and June. Most CIC events in Winnipeg are free to the public, while CIC members enjoy exclusive access to the speakers.

The Winnipeg Branch endeavours to showcase local speakers, and occasionally invites external speakers, to engage Manitobans in discussions about issues related to Canadian foreign policy. Speakers include academics, professionals, advocates and politicians. Branch events range from individual speakers to multi-speaker panels and multi-panel conferences. To show our appreciation, we host our speakers for dinner and offer a modest donation to the charity of their choice.

The Winnipeg Branch also sponsors local conferences, including the J. W. Dafoe Political Studies Student Conference and the Peace and Conflict Studies Student Association Conference, both at the University of Manitoba. 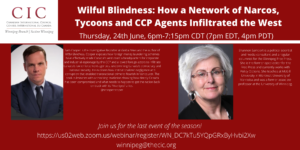 Willful Blindness: How A Criminal Network Of Narcos, Tycoons And CCP Agents Infiltrated The West – An Evening With Sam Cooper
June 24, 2021